On October 13, 2000, the Public Utilities Board announced, “New Measures to Control Voltage Dips”, which went effective on 1 November 2000.

The new measures include reviewing a licensed electrical engineer  (LEE)’s performance if the electrical installation(s) under his charge had caused a total of 3 voltage dips, within a period of 2 years.

This was the beginning of having all voltage dip incidents (date, site, LEE-in-charge) published on the Authority’s website.

Then, the utility’s (PowerGrid) power quality section, the Power Quality and Load Analysis (PQLA) section, was just being formed. The island-wide power quality monitoring system (PQMS) was still in the works. It became operational somewhere in 2001-2002 with 80+ PQ monitors monitoring voltage levels from 22kV to 230kV.

Singapore’s 230kV transmission network was just being split into two networks, effectively minimizing the impact of a 230kV voltage dip from one another.

Voltage dip, then and now is still a costly affair for sensitive industries. While just lasting in terms of milliseconds, it can have a detrimental impact on production processes, especially those in the semiconductor-related industries.

The utility via its subsidiary (SP Systems) introduced (shortly after in October 2002), a voltage dip mitigation device, known as the Dynacom. It was a single-phase ultra-capacitor-based device meant to compensate voltage dips as low as 40% of nominal and for up to 1 second.  It was targeted at protecting sensitive control circuits.

Fast track to today and the number of PQ monitors has more than doubled. The PQMS has enabled the utility to keep track and map out its voltage dip performance (System Average RMS Frequency Index – SARFI map) to the various regions of the island.

Singapore’s 230kV transmission network has since being split into 4 parts, limiting the significant impact of a 230kV voltage dip to just 1/4 of the island.

With inter-connectivity to our ASEAN neighbours being the talk of the town these days to improve the reliability of the electricity grid, we must not forget it does come with some downside as well.

Being inter-connected, any fault that occurred in one country’s electrical network can be seen in another. For instance, right now, Singapore is connected to Malaysia at 230kV. Any faults on either side of the network will be seen by both.

Here, in a recent event whereby a Tenaga Nasional Berhad (TNB)’s transformer was reported to have tripped. It had caused a voltage variation here in the eastern part of Singapore.

“Does frequency changes during a voltage dip?” – A favourite question among many. The answer is “Yes”.

This will be quickly followed by “But why our power quality monitor did not show significant changes in the frequency values even though a voltage dip event was captured?” The general answer is that the standard (IEC 61000-4-30) does not require it to measure such detailed changes in frequency values.

With the voltage waveforms captured, it is technically possible to calculate the frequency values during a particular event (say a voltage dip). Here’s an example, where the event waveforms were post-processed (via the Dranetz Dranview 7 software).

Such post-processing feature is very useful especially in generator load-test applications, where one will be interested to know both the voltage and frequency changes during every step-load change. An example is shown below. One just need to ensure that the pre/during/post event waveforms were set to be captured properly (i.e enough cycles). The software will do the rest.

Earlier this evening, there was a voltage dip that occurred just before 7pm. The following is a waveform captured at Low Voltage (monitored at L-N), located in the city area.

Reports of voltage dips from other PQ monitors in other transmission blocks suggest this was a Transmission-level fault.

Voltage waveform seen here was at LV (L-N). It mirrored what was seen at 22kV and above (at L-L). From here, it can be inferred that there was a transmission level single phase fault (Phase L1).

A shallow voltage dip was recorded this afternoon in the city area at approximately 3:01PM.

Most equipment will not be affected by this shallow ~12% dip.

Earlier this evening, there was a Transmission-level fault that occurred at approximately 7pm. The following is a waveform captured at 22kV incomer (monitored at L-N), located in the city area.

Here, it suggests that there was a Single-phase fault (L2) and that it originated upstream at higher voltage levels. There were reports of voltage dips from other PQ monitors in other transmission blocks as well.

Update: Suspected fault originated from Genco facilities in the west.

Earlier this morning, there was a Transmission-level fault that occurred at approximately 10:07AM. PQ monitors in the city-area captured the following waveforms at the 22kV incomer and at the 400V LT incomer side.

Here, the benefit of monitoring at L-N instead of L-L at 22kV is being showed clearly here. It is evident that there was a single-phase fault (L2) and that it originated upstream at higher voltage levels.

Note. A single-phase fault at 22kV will cause the other two phases to swell (not seen here).

There were reports of voltage dips in other transmission blocks from other PQ monitors. With this kind of magnitude observed here at 22kV, it is very likely that this fault originated in the same transmission block as well.

When a 230kV fault occurs, a quarter of Singapore will feel the worst dip magnitude (the region where the fault occurs), with the other 3 regions observing shallow voltage dips. Below is an example (via a Dranetz HDPQ) in the North region of Singapore during this same incident.

Earlier in the week, areas in Tampines, Loyang, Bedok, Pasir Ris will have experienced voltage dips. It was made known later that it was due to a 22kV cable fault in Tampines area.

Few sets of our portable PQ analyzers placed in Loyang was able to capture this event. It registered voltage dips (at low voltage) of about 20%, lasting around 60-80ms. Recorded data showed that it was a three-phase fault. 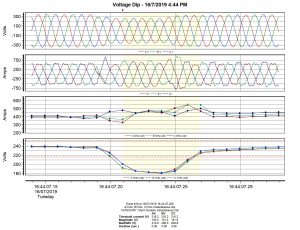 One may be curious, how could a fault in Tampines result in a voltage dip in places like in Loyang or Bedok?

Our local distribution grid is densely interconnected, resulting in a high-reliability electricity network. Total blackouts are rare. But interconnectivity brings about a small disadvantage. Any fault will be seen/felt (in the form of a voltage dip) by everyone who is connected. The seriousness of this dip will be dependent on the types of faults and the electrical distance between you and the fault point.

Here in our case, the fault was in Tampines area. Based on experience, for a voltage dip ~ 20% to be seen at another 22kV network, it will need to be a significant fault causing a voltage dip in the range of 80-90% in the fault area (Tampines). Loyang (where our PQ analyzers were) is connected to Tampines at 66kV level. 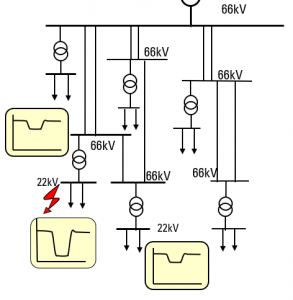 Added the following screenshots obtained from a PQUBE, being monitored in South of Singapore, at Low Voltage. Thanks James!

Earlier this afternoon in the midst of the year-end festive mood, you might have seen your office lights flickered twice in an hour: two transmission-level faults occurred. Tell-tale signs were from the nature of the waveforms and that in general, everyone in Singapore ‘felt’ it, with 1/4 of the island getting the ‘worst-magnitudes’.

One at around 1:46pm and the other at 2:36 PM. The following were captured from an office in Jurong East and in Bedok area (at low voltage).

At 1:46PM, it can be seen that the dips were fairly shallow.  Hence it can be deduced that the origin of the fault were neither in the 230kV blocks that these two sites are located. From the RMS trend of the waveforms captured at Site 2, it can be inferred that it was likely a single-phase 230kV fault on Phase L1 (Red).

At 2:36PM, the dips were much more pronounced at Site 1, suggesting that it resides in the same 230kV block as the fault. Here it is very clear that the 230kV fault was on the Phase L3 (Blue). At the second site at Bedok, the dips were again shallow. These are characteristics of a 230kV transmission level fault in Singapore. Only 1/4 of the island will be most affected with dip magnitudes in the range of 40 to 50% (dip by).

Earlier in the morning today, there was a localized voltage dip (dip by ~ 80%) in the Jurong East area. From the waveforms captured, it can be inferred that there was a 22kV L3-L1 fault.
Sensitive equipment was likely to be affected, especially those sensitive single phase LV control circuits taking in on Phase L3.